A restaurant on the west coast, long considered one of the best in the US, would serve only a 13-course fixed menu meal, with each course just a few bites. Asked why, they replied that unless the guests were left wishing for “just one more bite” of each dish, they had given the guest too much — because the last bite wouldn’t have been fully enjoyed.

Santiago and Valparaiso are our last bites of Latin America, and already we’re planning our return. This morning we both got blurry-eyed, knowing we were leaving our last apartment of the whole trip. We’ve spent the afternoon in Valparaiso taking dozens of pictures from all angles, and fully enjoying ourselves — and wanting more. 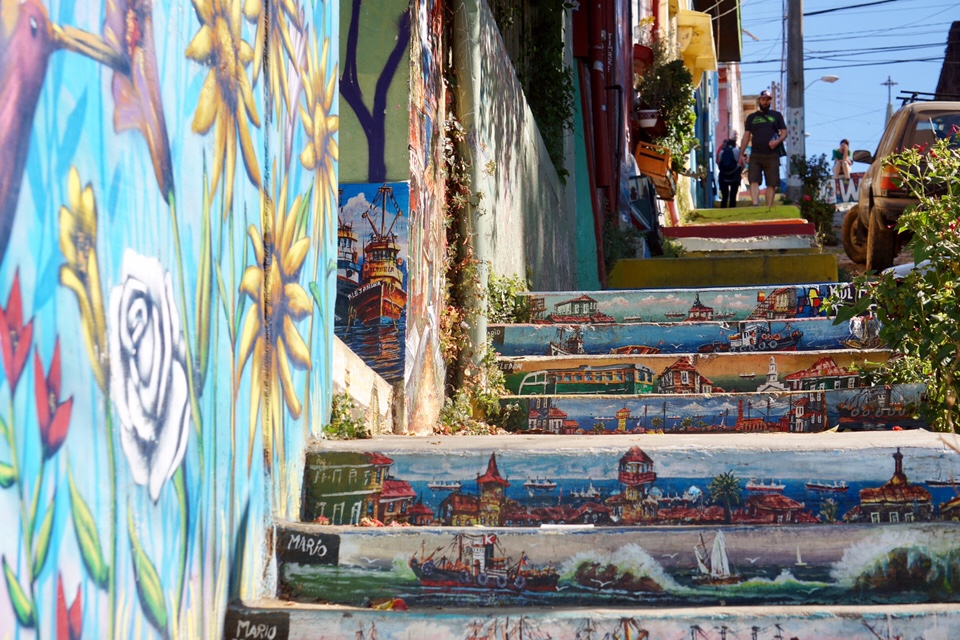 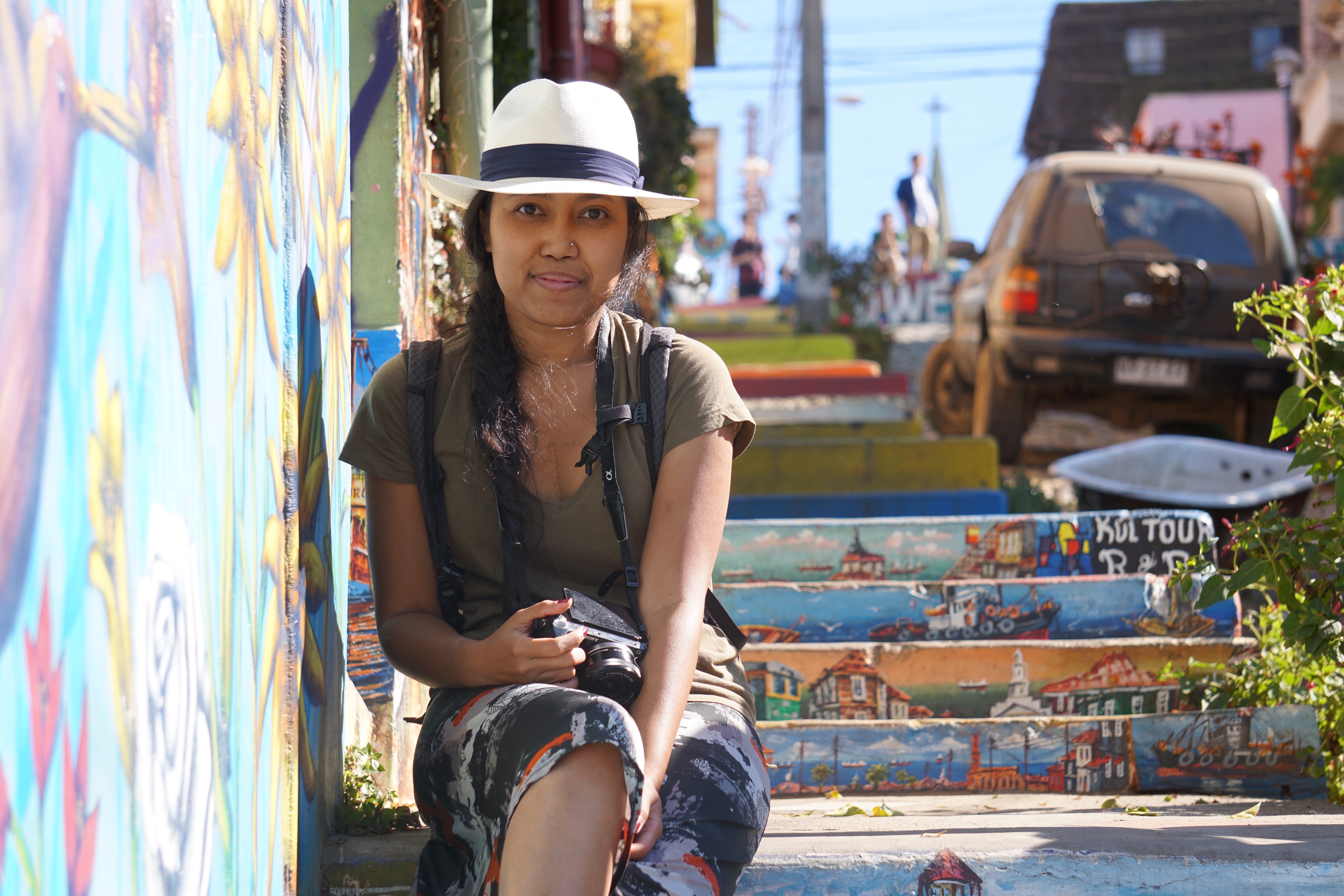 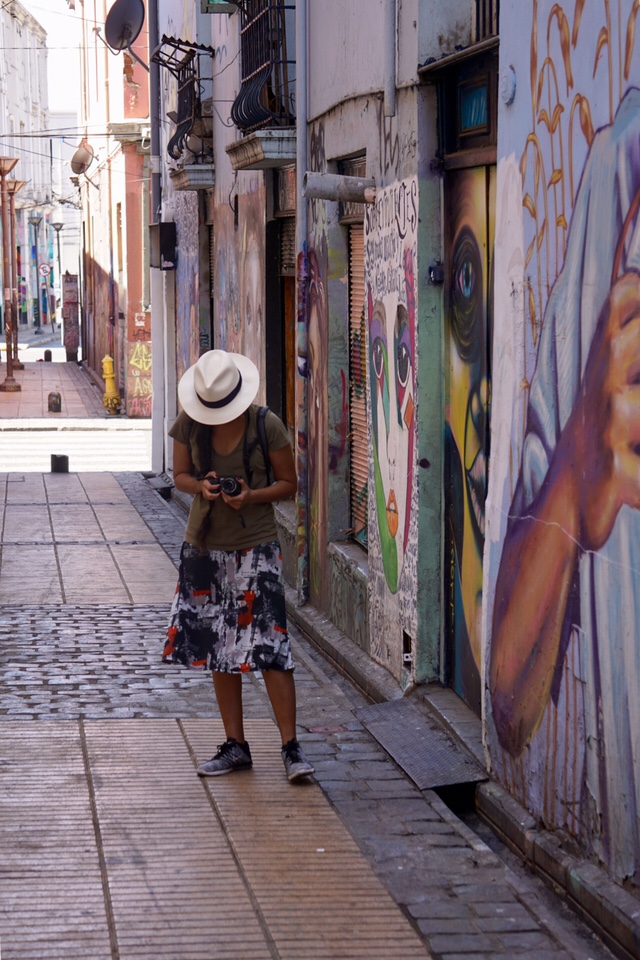 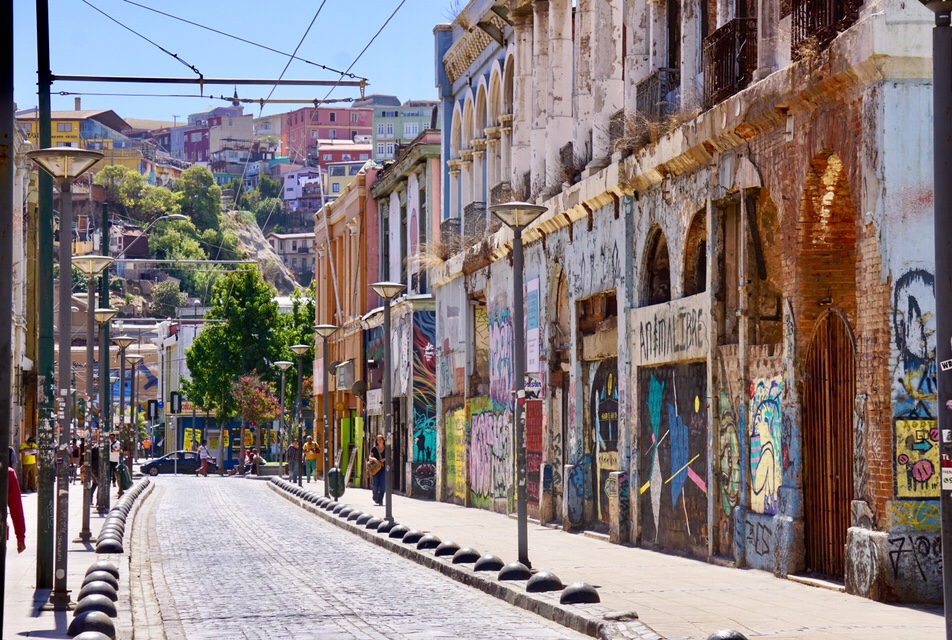 I love the colors of the life here, the constant vibrance of the streets, the street performers dancing or playing drums, the bustle of men in suits walking to their cafes or families heading to parks. This is the rhythm of Latin America, the rhythm my life has taken on for the last two and a half years, and I’ll miss it.

We arrived in Santiago a week ago and checked into our AirBnB, our apartment home for this stay. When we were planning our Patagonia ride we scheduled just 2 weeks for the time down and back, and planned on meeting a friend from Buenos Aires tango classes who was on another road trip near Santiago. We arrived 4 days late, and so had to rush on our first day to meet up. After checking in and showering, we rushed through the city to a sushi bar in the Bella Vista neighborhood.

First impressions were mixed; coming from the plaza, the surrounding neighborhood was mostly shut down on the Sunday evening, and dodgy. But we transitioned into the Bellas Artie’s district, and suddenly found ourselves in a hipster area, with second wave coffee shops crowded next to vinyl stores and tiny Thai restaurants.

Seeing our friend again was a wonderful finish to the trip, sharing a bottle of wine and a meal and conversation for a few hours to celebrate that, for us and for this trip, this was an ending.

A sense of unreality has pervaded since. On Monday we walked the city, but with the bike in a nearby parking garage, everything was normal except the lack of conversation about where we would ride next. And the sense of relief: driving on the highways in Chile was a little crazier than expected, and both of us had been fighting a sense of doom for the last day or our trip, worried about dying at the very end. That became stronger when we witnessed a car crash in front of the coffee shop we were in, and when Amp was nearly hit by a dolly falling from a Coke delivery truck, both in the space of ten minutes.

We packed her and wrapped her and set her on a pallet, and the forklift took her away. I’ll miss my bike for the next couple weeks, but even more, I miss knowing that I’m about to ride somewhere new and exciting. I bought the bike just for this trip, and even though I don’t know when I’ll do another lining ride, I can’t bear to think of selling it right now. Even shipping it hurt a little… 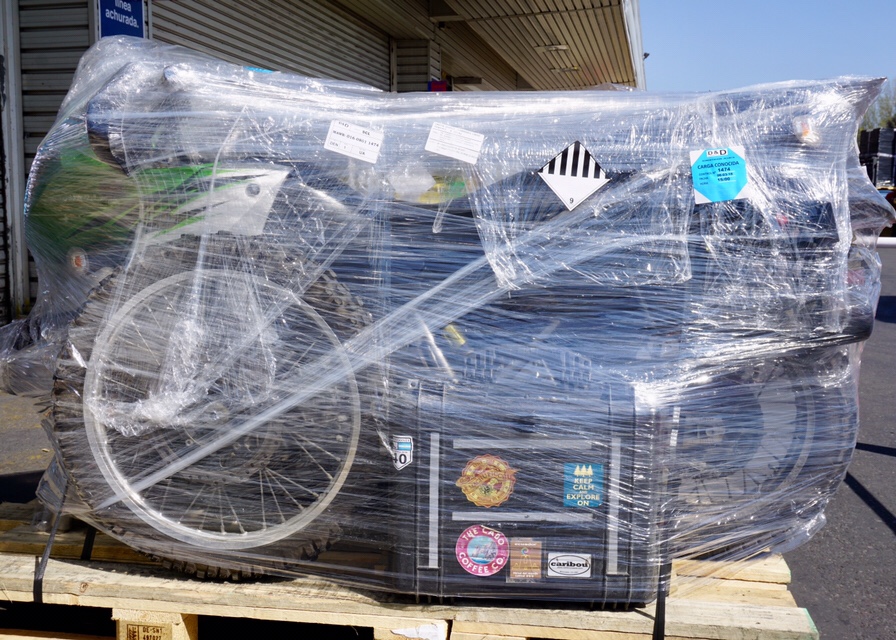 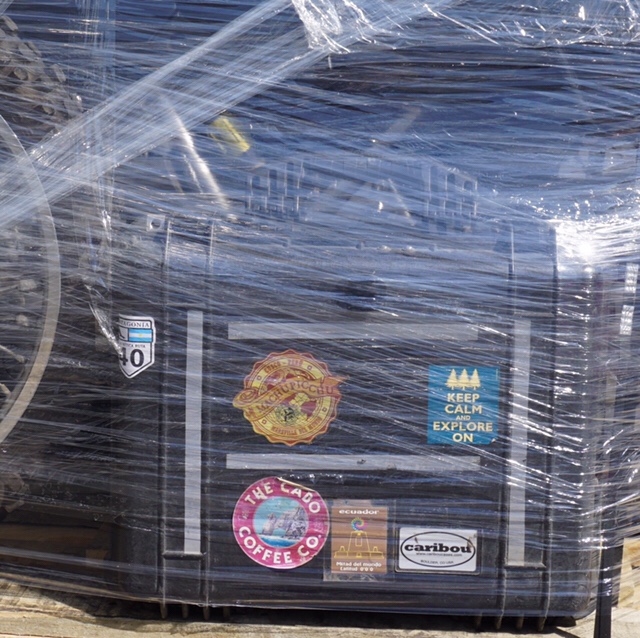 We made it. We’ve arrived in Santiago. We are finished with the PanAmerican Highway – for now. 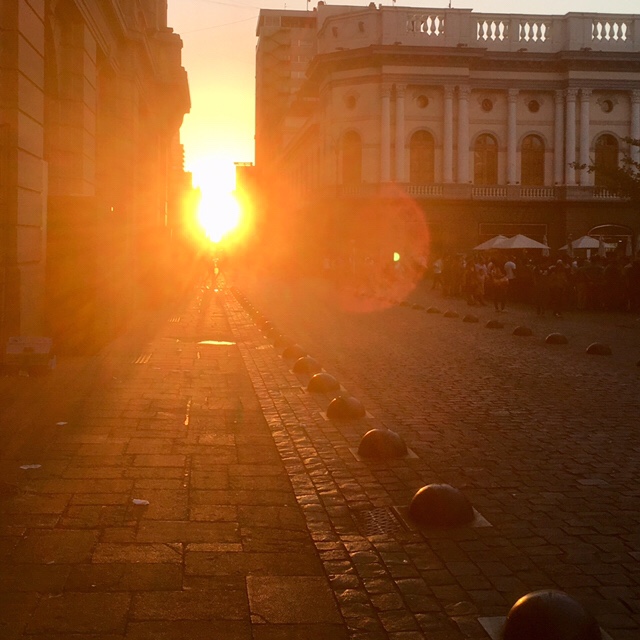 We’re in Chile! The last border crossing with the bike is finished, we arrived in Victoria yesterday evening, and we plan to finish our riding today (inchallah). The relief at crossing yesterday was amazing – another hurdle cleared for us to run this last leg.

Our day didn’t go as expected. We’d planned on crossing the border within the first couple hours, riding to Osorno, then spending the rest of the day riding north to Temuco. But three hours of riding in Google still showed the border being an hour away; it turns out I’d made a wrong turn at some point and when I’d pulled over to check the map, Google had already rerouted us to a border crossing further north. By the time I became suspicious enough to zoom out to see the whole route, we’d gone too far to go back. I wasn’t worried till we saw the gravel section coming up, which took us 30 minutes to travel just 7 miles.

We got lucky, though. The Chilean side of the Mamuil Malal border crossing was fully paved, and beautiful. And instead of the 3-hr wait as we expected for crossing at Antonio Samore border crossing, we had about 20 minutes total of friendly officials who liked my Thor’s Hammer.

And while I’d been worried about my fuel, we found a beautiful lodge-style gas station with a restaurant and friendly waiter, a man from Haiti who’d immigrated to Chile.

As an even bigger bonus, we were sad to leave the YPF gas stations with Full Cafes, but the highways here are lined by magnificent stations with Pronto cafes. I’m happy to be in Chile, happy to be making it safely so far, and asking for one more day of grace on the road; and a lifetime after that while I continue to travel, because it never hurts to ask, right?

Sometimes you just need a day of lazing amongst puffy white comforters and watching Netflix. 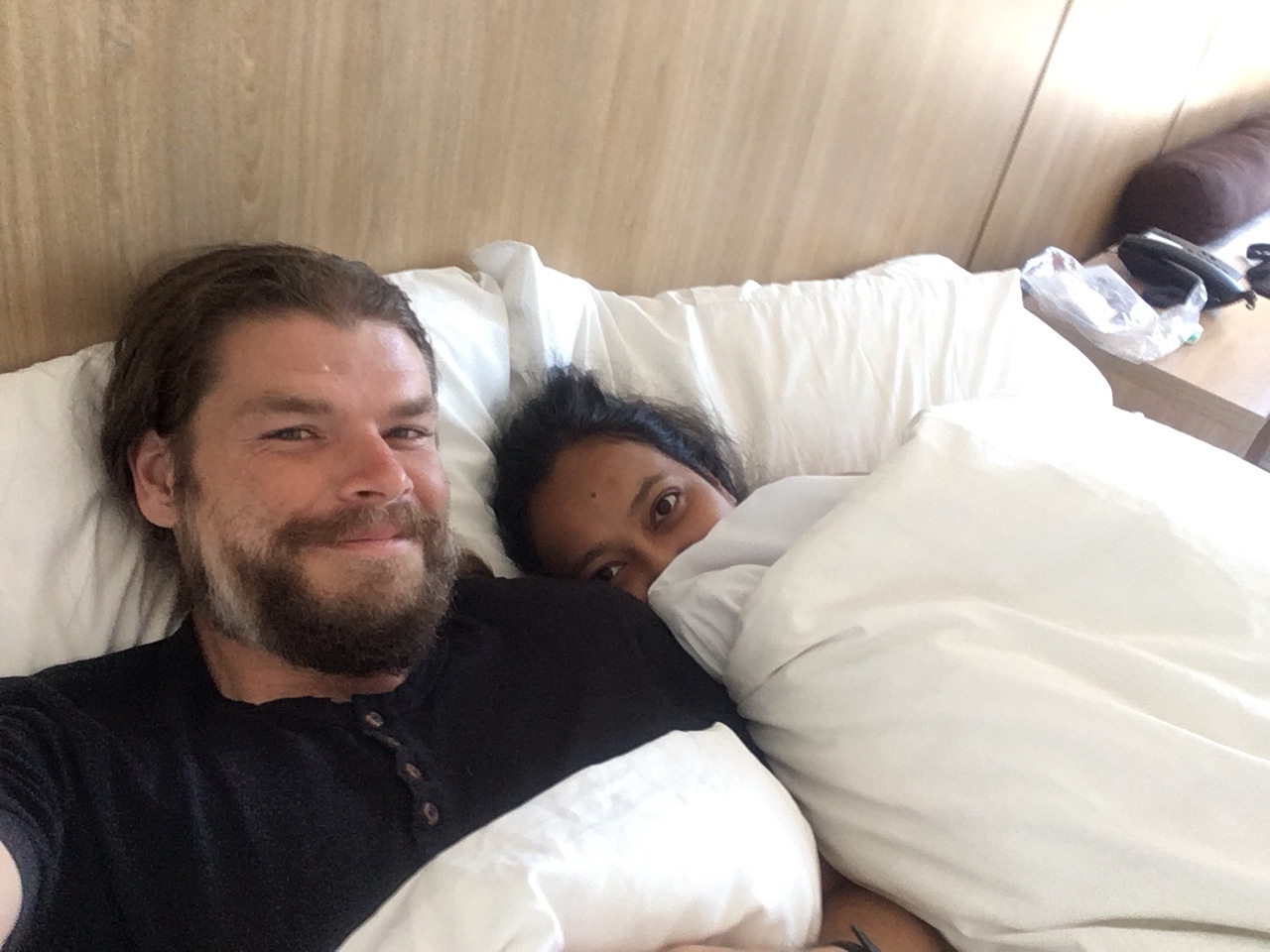 We’ve had that today, and tomorrow, apparently, we’ve got a likely 3-he border crossing to complicate our 7 hr drive. Gotta get a good sleep tonight.

The trip up hasn’t been easy; but there are definite rewards. We cleared our heavy goal today: 8:30 AM to 7:30 PM, with a break for lunch. Wind, again. A small gravel section during road construction. Tiredness. Soreness.

But also, we made friends at lunch – we shared a fantastic couple hours chatting about the road; they’re from Canada, doing our trip in reverse on two BMWs.

And when I was most tired, we stopped for a break, and the road yeilded a wild blackberry bush, with a handful of sweet, tart, juicy, sun-ripened berries.

And at the end, we’re here in El Bolson, eating roast chicken on a terrace in twilight, the mountains looming over us. I found a new tire for the motorcycle – my back tire is getting more worn each day, to the point I’m relieved when cornering to be on a treaded area instead of further wearing the flats – so tomorrow I’ll have less worries.

Today was hard, and beautiful.

I’ve just eaten a wonderful tarta frita (sopapilla) and had a nice hot cup of cafe con leche at a gas station with no gas. We’ve travelled 140 miles on the current tank, and have 81 miles to go before a station that, allegedly, will have gas. It //should// be fine…

It was, more or less. We ran out of main fifty miles out, and I slowed to 50 mph to conserve.

I had a coworker who used to say, when asked how he was, “At my age, any day out of the ground is a good day.” Today I dumped the bike, but we didn’t get hurt; it was a good day.

We had planned on traveling to Perito Moreno town today; instead we covered half that distance. The road wasn’t just dirt, which I expected, but was deep gravel – gravel piled in furrows, sometimes 8 inches deep, gravel so loose that pushing the bike across it was difficult, much less riding. And with occasional cross winds gusting at 40 mph, I’m grateful to have only dumped the bike once.

I felt good about today till a few minutes ago, when a Google streetview image showed gravel further up our route. Now I’m trying to figure out whether the road has been paved since, and what I can do to avoid another day like today. 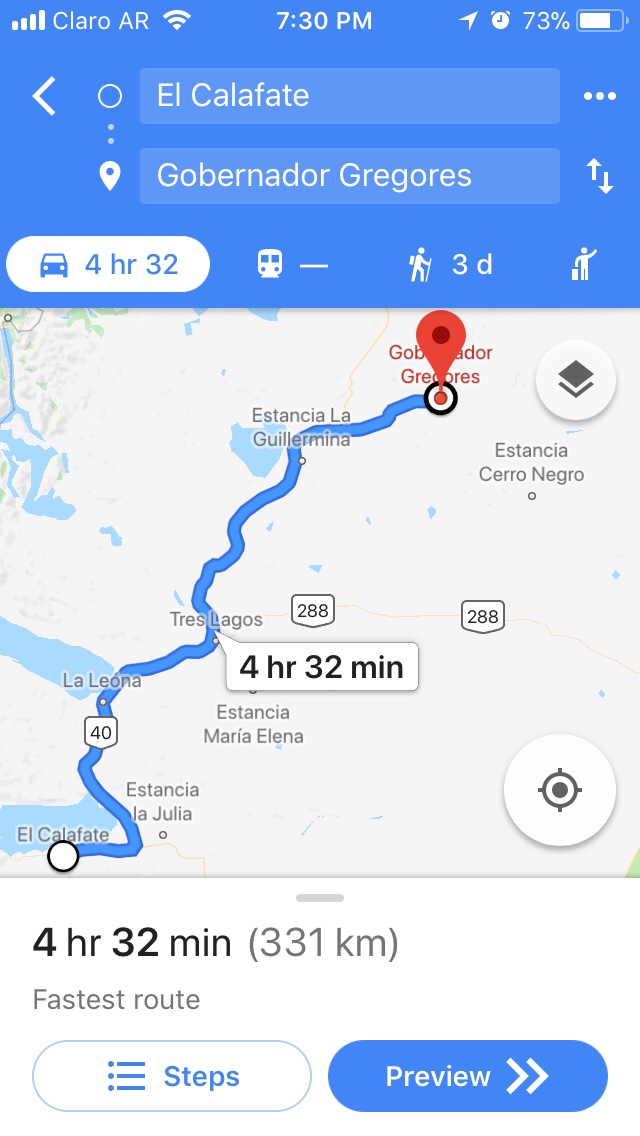 I hadn’t planned on posting today, it being Sunday… but we drove to see this today: 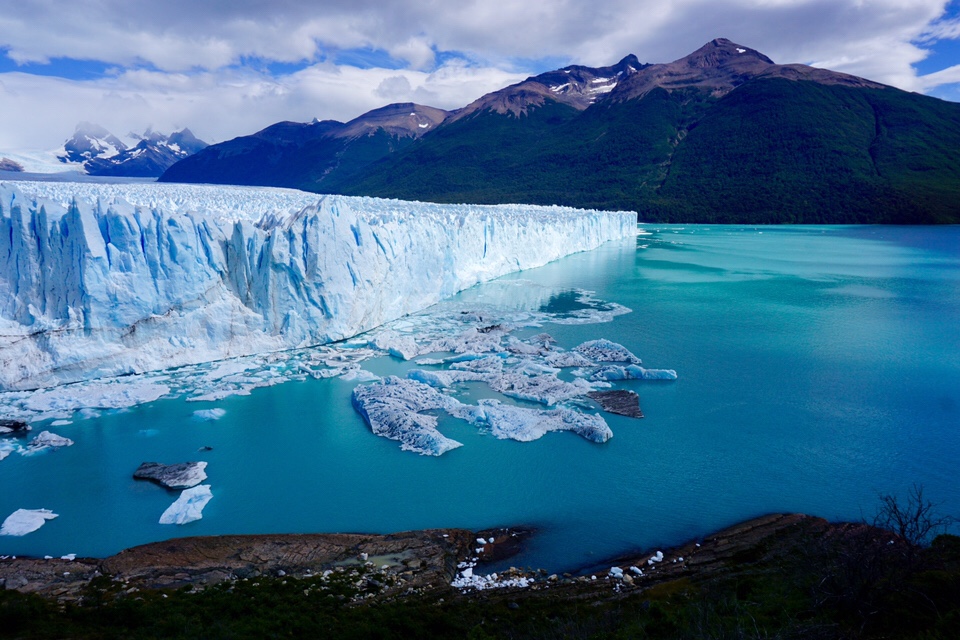 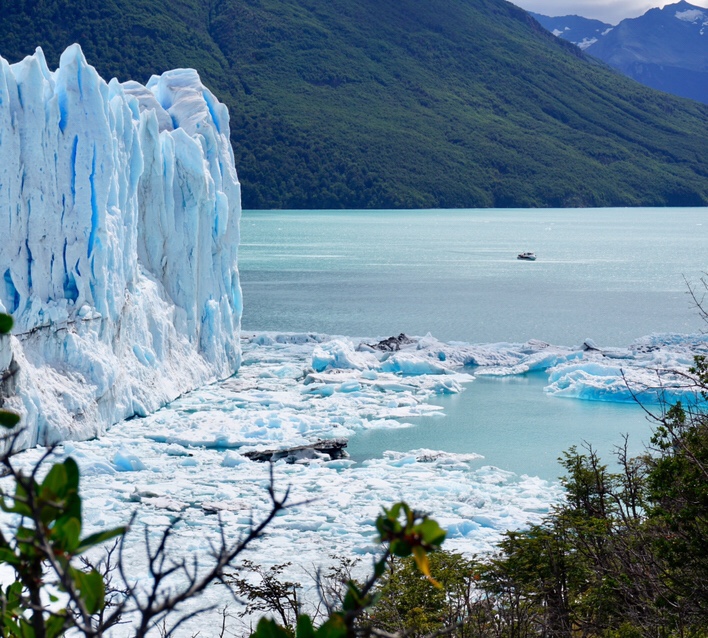 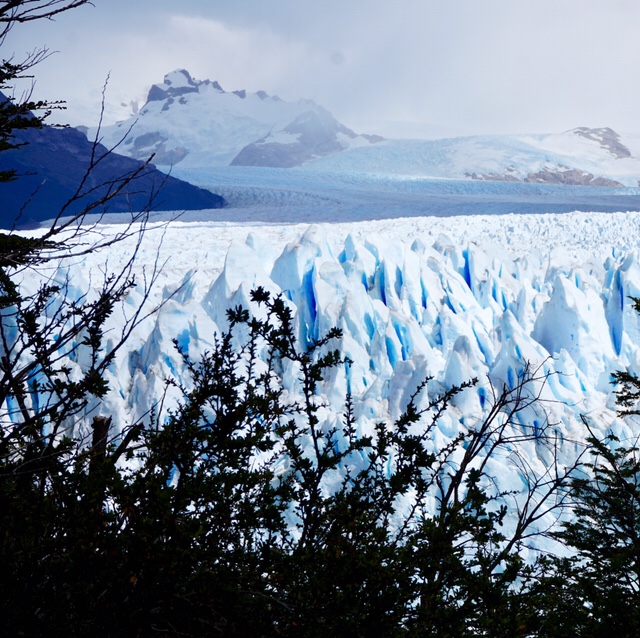 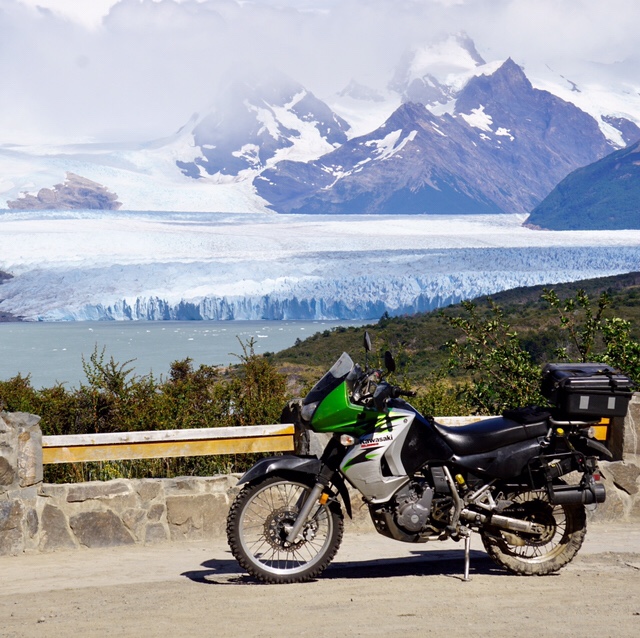 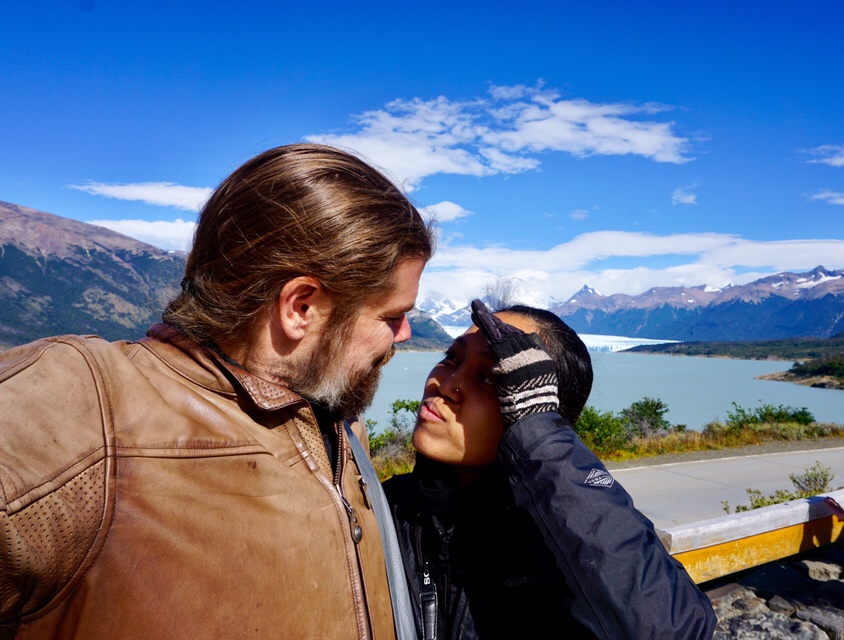 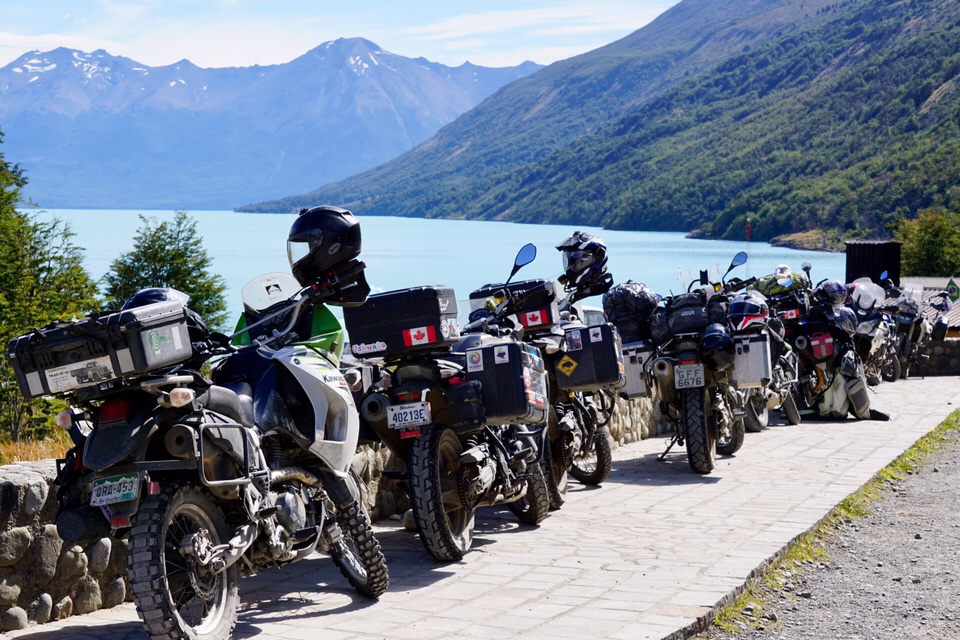 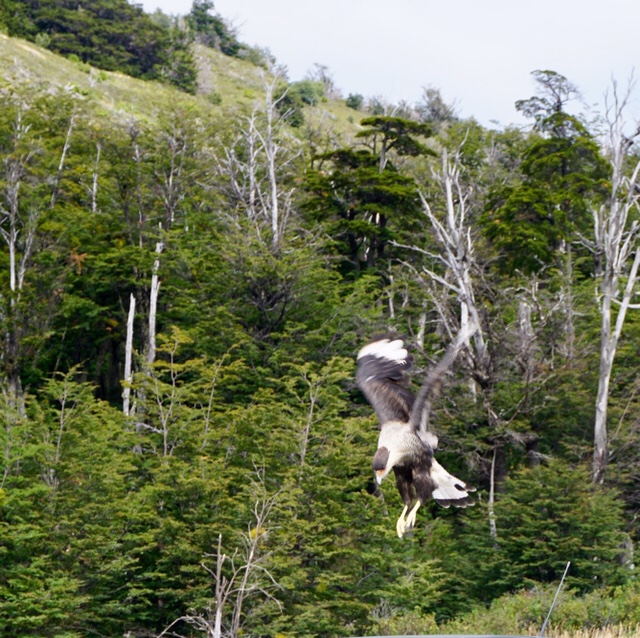